History of the choir

Thanet Festival Choir was founded (as Margate Festival Choir) in 1946. George Vesey, our Founder, was at the time Organist and Choirmaster of the Margate Congregational Church. The ‘Isle of Thanet Gazette’ reported on 6th September that there was to be a three-day music festival at the Winter Gardens from 25th October, and that    ‘a festival choir‘    was being organised  for performances of  Merrie England on the first evening and Elijah on the third.  The concerts were well-received and performances of Messiah and Mendelssohn’s Hymn of Praise followed. There then appears to have been something of an hiatus, but the Choir’s ‘Minute Book’ records a general meeting on 24th May 1950 ‘for the purpose of re-instating the Margate Festival Choir under the leadership of Mr George Vesey’. 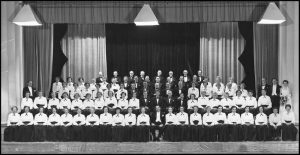 Members of the choir outside the Plastirion Hotel on the seafront at Rhyl: Eisteddfod trip, July 1955

The Choir performed regularly during the next few years with most concerts taking place at Margate Congregational Church. In 1955, the Choir took part in the International Eisteddfod in Llangollen,  and in the following year members undertook a short tour to Germany. During the 1950’s and the early 1960’s, the Choir performed at the Purcell Room, featured in several radio broadcasts and took part in the ‘Top Town’ and ‘Let the People Sing’ television series. 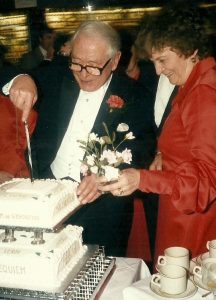 The name was changed to Thanet Festival Choir in 1973; by this time the Choir had established a regular pattern of concerts to which it largely still adheres today; oratorios or other religious works at Easter and in November, a Christmas Carol Concert in December and lighter works in the summer. The Choir appeared on television with Benjamin Luxon in 1989.Shortly after this, George Vesey retired as Music Director, but he remained as Vice-President until his death in 1995. George was succeeded by James Gillespie who had been the Choir’s accompanist since 1958. Under James’ direction, the Choir gave several performances of works by Gilbert and Sullivan, performed Messiah, Elijah, Creation and Bach’s St John Passion at Margate’s Winter Gardens and took part in a Christmas Festival with Paul Neville and the Kent Concert Orchestra. James’s  final concert as Music Director was a fiftieth anniversary Dream of Gerontius in 1996. He continued to support the Choir as Vice-President until his death in 2015.

Under the leadership and inspiration of our current Music Director, Clifford Lister, our numbers have increased, we have learned a great deal about singing, and we have developed in new directions. Clifford has introduced us to a wide range of new repertoire, including opera choruses and modern works such as Karl Jenkins The Armed Man and Howard Goodall’s Eternal Light.  In 1998, the Choir visited Les Mureaux in France for a joint performance of Bach’s Magnificat, with the French choir visiting Thanet for a repeat performance in 1999. More recently, we have established a relationship with La Chorale Guillaume Dufay de Chimay, Belgium. So far, the Chorale has visited Thanet twice and we have visited Belgium three times, most recently in May 2019.

Other recent highlights have been Bach Matthew Passion and Mendelssohn Elijah. Perhaps the crowning glory was a joint concert with Sutton Valence Choral Society, of the Verdi Requiem in Canterbury Cathedral in October 2013 , although our 70th anniversary performance of Handel’s Messiah and 2018’s Israel in Egypt with the Seventy Chamber Choir were rather special, too.

Unfortunately the Covid-19 pandemic necessitated the first break in live rehearsals since the late 1940s. After a long spell during which we rehearsed on Zoom we returned in September 2021, but cautiously, without any public performances.  ‘Normal business’ was resumed in April 2022 with our first public concert in nearly over two years and we are now looking forward to our second year ‘back in live action’ with performances of Puccini’s Messa di Gloria on 17th September (postponed from July) and an all Fauré programme on 19th November. 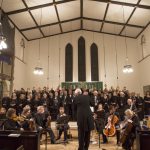 Click on the small photographs to see a larger version. 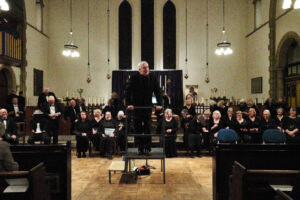